What happened to Juan Siqueiros?

Soledad Jacome lived in the house at 196 N. Court Avenue from the construction of the northern room in 1866 until her death in 1911. Today the house is the gift shop and exhibits rooms of the Presidio Museum.

Soledad was the mother of six daughters, most of whom were apparently fathered by a man named Juan Siqueiros.

Juan was born in the Presidio San Agustin del Tucson around 1840, the son of Jose Siqueiros and Maria Gonzales. His father was a Presidio soldier. Juan entered into a relationship with Soledad around 1857. The couple's first child, Inez, was born in January 1858. Afterward they had Isadora (1860), Phillipa (1862), Bernarda (1865), Petra (1868), and Paula (1873). Phillipa apparently died as an infant and Petra died in the smallpox epidemic of 1870.

Juan disappeared after the birth of Paula in 1873. What happened? A sign in the museum states he either left Soledad or died after 1873. Genealogy is a never ending pursuit- you cannot predict when you will find new information about someone. Recently, this proved to be the case for Juan. As it turned out, he moved north to Maricopa County and married a woman named Mariana Quihuis in 1891. The couple had four children, two of whom remained unidentified. The others were Ramon (1881-1948) and Juan (1887-1954).

In 1900, Juan, his wife Mariana, and their sons lived in Maricopa County, where Juan worked as a farmer, helped out by Ramon.

In 1910, the couple lived in Phoenix, with Juan no longer working. He died from apoplexy (a stroke) on November 22, 1915 at Buckeye. He was buried in the Saint Francis Cemetery in Phoenix. 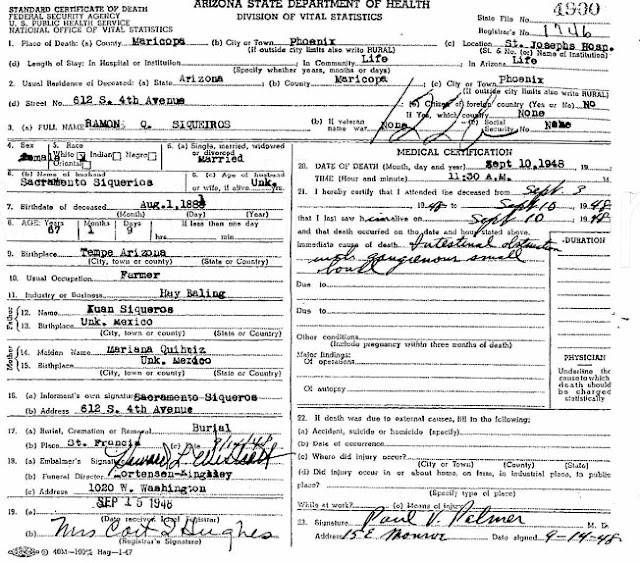 What we do not know is why Juan and Soledad split up after having a relationship for 16 years. We also do not know if the families remained in contact with each other.