The Early Agricultural Period extends from 2100 BC to AD 50. The period is divided into three phases. The Silverbell Interval runs from 2100 BC to 1200 BC. During this time span maize (corn) made its way north to the Tucson Basin, where it was planted in fields by people living along the Santa Cruz River. These people relied primarily on gathered plants and animals they hunted along the river and nearby mountains. Maize supplemented their diet, but they moved about the landscape, seeking out food resources, likely on an annual schedule. We don't know a lot about this time span because the sites are deeply buried in the flood plain, in some cases more than 10 feet down. Few archaeological projects are conducted at that depth. 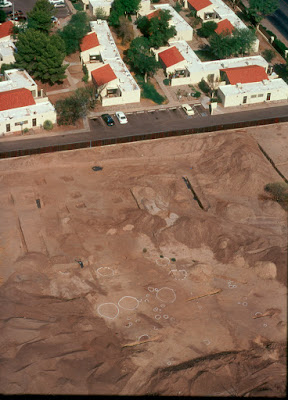 
The San Pedro phase goes from 1200 BC to 800 BC. During this time irrigation agriculture was extensively employed, with ditches taking water from the Santa Cruz River and from other smaller streams, the Rillito, Pantano, and Canada del Oro, that may have had water only during the monsoon season. The small ditches carried water to areas where numerous small fields were dug out, the dirt piled around the edges in berms. Water was run into the fields, filling them, and then the berms were closed and the next plot watered. The Las Capas site had very large field systems that were explored prior to the construction of large tanks at the sewage facility at Ina Road.

Many storage pits were found at the site. Bell-shaped pits have a narrow opening at the top, with the pit widening out below. The narrow opening limited the amount of water, insects, and rodents that could get inside the pit, preserving whatever was stored inside from damage. Most likely the pits were used for short-term storage of maize and other perishable items. 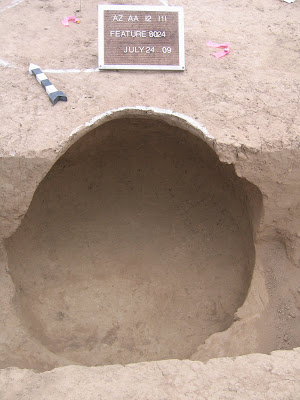 A bell-shaped storage pit at the Las Capas site. 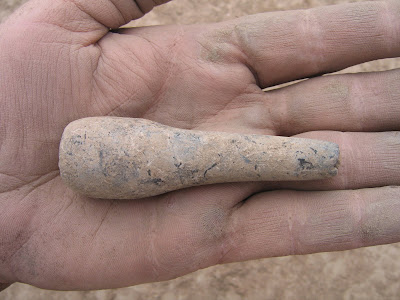 This fired-clay pipe was found in the pit, the oldest example known from the Tucson Basin.

The Cienega phase runs from 800 BC to AD 50. This period saw the creation of larger villages, perhaps occupied year round. We find many small, round houses, some used as dwellings and others for storage. Each community usually has one larger house that was probably used for ceremonies or gatherings where community concerns were discussed. The pit structure in the Presidio Museum dates to this time period. Abalone shell jewelry, probably manufactured in what is now modern-day California, and obsidian sourced from distant places in Arizona, New Mexico, and Sonora, show that people were trading between far-away places. A few small pots have been found, revealing the first experimentation with ceramics.


The pit structure in the Presidio Museum, as excavated.

Artist Robert Ciaccio, of Desert Archaeology, Inc., has created visualizations of what a Cienega phase village at the Clearwater Site would have looked like, using archaeological and ethnological evidence. These depictions help modern people better understand what life was like in long-ago Tucson. 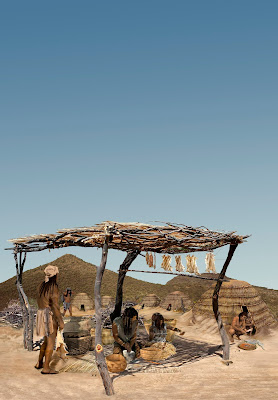 For more information about the Early Agricultural Period, the Tucson Underground issue of Archaeology Southwest Magazine is available in the Presidio Museum gift shop for $10. 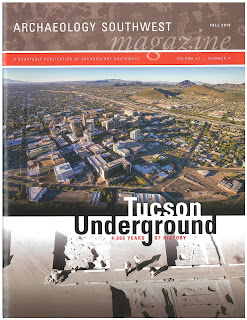