Rooted in Tucson’s Past 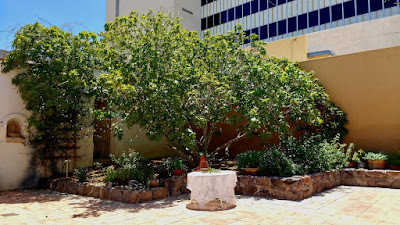 There is a grand fig tree that sprawls across the southeast corner of the Territorial Courtyard, commanding over the newly created Soledad’s Garden. It predates the Museum. In fact, it may even be rooted in Soledad Jacome’s original patio garden, dating back more than a century. 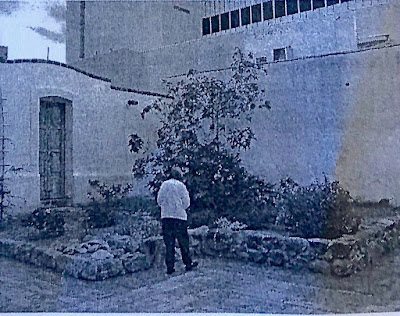 When the Presidio opened in 2007, above-ground the tree was merely a few scrawny suckers that had sprouted from a big old trunk. Underground, a perduring root mass indicated that there was a lot more to the story. Archaeologists found there had been a privy pit nearby, which seemed to explain how the tree could have survived the passage of time. The organic matter would have increased the fertility and water-holding capacity of the soil, giving the tree the extra boost it needed to get through a long period of oblivion, until the new Museum caretakers and City arborists came to the rescue. 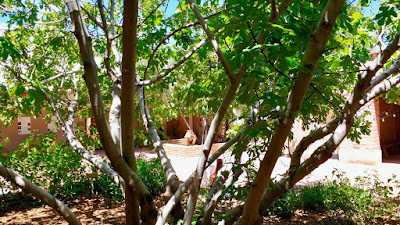 The fig tree from behind.

The fig tree now stands tall and wide, providing a verdant leafy refuge and deliciously sweet fruit for insects, birds and people. It is what is known as a Black Mission Fig, the most widespread variety among Tucson’s heirloom figs, for it tolerates our scorching heat, moderate frosts and alkaline soils, as long as it gets properly abundant irrigation. It offers two crops a year: the first—breba—crop grows on the previous year’s wood and ripens in late May to early June, whereas the second crop grows on the new wood and ripens in mid to late July. 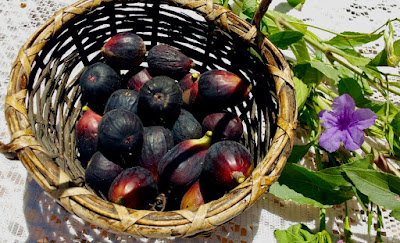 In truth, the “fruits” are not fruits at all, but receptacles containing many flowers. The small hole in the bottom of figs is the entryway for the fig-specific pollinator, the fig wasp. However, although Spanish missionaries introduced figs into this region at the dawn of the 18th century, the fig wasps that co-evolved with Ficus carica since it originated in the Fertile Crescent (the area around  Iraq, Syria, Lebanon, and Turkey), about 6,000 years ago. They did not exist here in America and were brought to Tucson by the Spanish. Luckily, figs are easy to clone with cuttings. Surely, many of the heritage fig trees around the Old Pueblo, including this one, came from the same stock, propagated in backyards, and shared among neighbors.

Interior of a fig.
Monsoon season is fig season. Ripe figs are very soft to the touch, droop slightly and are easily removed from branches. They ripen in succession and should be harvested daily, for it is ever the game of cat-and-mouse with the birds and bugs. As the season advances, so does the clamorous buzzing and dive-bombing of the ‘fig-beetles’ or ‘June bugs’, who cluster around the sweetest figs and devour them. Still, there always seem to be way more than enough left for people to eat fresh, as jam, or in the traditional empanadas. 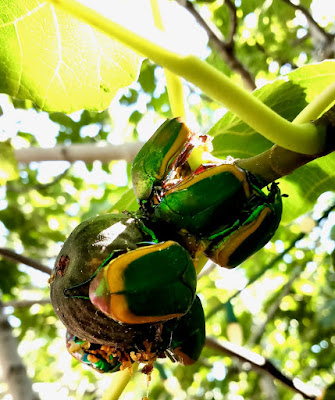 Fig beetles enjoying a fig.
Sweet figs, June bugs, and the scorching hot humid days of high summer. All things inevitably also experienced by Soledad, and her daughters, and her neighbors, back in the day. All part of the cycles of this place, rooting us to it, past and present.