In 2001, Desert Archaeology conducted exploratory archaeological work in a parking lot at the southwest corner of W. Washington Street and N. Church Avenue. The parking lot had been in use since 1955. Prior to that time it was the location of the Dodge Boarding House, operated by Herbert and Julia Dodge. The boarding house was constructed in 1898 and was torn down in early December 1954. Today you can see some of its stone foundations outside of the Presidio Museum on its east side.

Local businessman and history enthusiast George Chambers had photographed the Dodge Boarding House prior to its demolition. He knew that the area was probably the corner of the old Spanish Presidio, so he set about organizing an archaeological excavation, enlisting students from the Anthropology Department of the University of Arizona and raising money to pay them.

The archaeologists quickly found thick adobe walls. Their attentions were soon diverted when they found a prehistoric pit structure, which they proceeded to excavate. 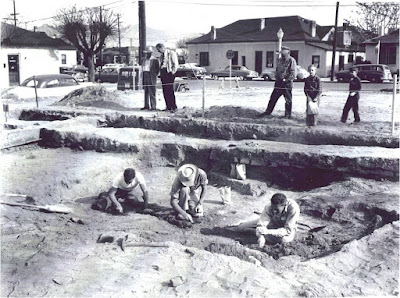 
Hundreds of people came to view the excavations. George Chambers hoped the City of Tucson would preserve the site, but local politicians were not interested. The excavation was back-filled on December 28, 1954. 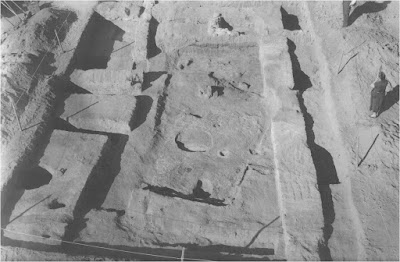 The completed excavation, with the adobe wall on the right with the pit structure in the center (photo courtesy Arizona State Museum).


Fast forward to December 2002. On the first day of the Desert Archaeology dig we decided to re-excavate the pit structure explored in 1954. One of the archaeologists asked we were going to find a time capsule. I laughed, "No one finds time capsules." An hour later a large pickle jar was found in a pit inside the pit structure. Visible through the glass was an envelope with the letterhead, "Tucson Newspapers Company." This was the business headed by George Chambers. 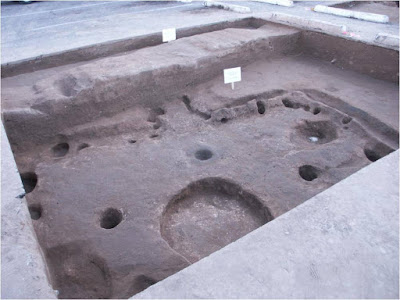 Re-excavated Presidio wall and pit structure. The time capsule is in the pit on the right (photo courtesy Desert Archaeology).


On December 5th an opening ceremony was held. After I removed the lid, Mayor Robert Walkup reached in and gently pulled out the letter. It was opened up and the letter carefully unfolded. 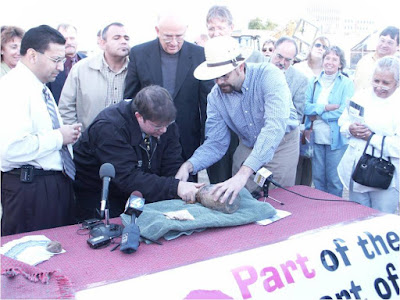 Councilman Fred Ronstadt trying to remove a newspaper from inside the pickle jar. Mayor Robert Walkup stands behind him (in black suit jacket). Presidio Trust member Irma Moreno watches from the far right side (photograph by Robert Ciaccio, Desert Archaeology).


The letter read: "TO WHOMEVER MAY BE AS MUCH CONCERNED AS I: AND MORE SUCCESSFUL IN AROUSING PUBLIC INTEREST IN THE IMPORTANCE OF PRESERVING THIS HISTORIC SITE." 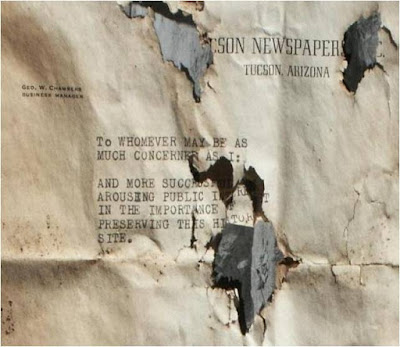 George Chambers had passed away in 1978, so never knew that his hopes that the site would be preserved would take place. After finding the well preserved adobe walls of the corner tower and east exterior wall, the decision was made to recreate the corner, carefully offsetting the new walls so that the original walls could be preserved in place.
at July 17, 2020